Yesterday, I went for a walk.

I don't believe you really know an area until you've felt it beneath your feet. So with time to kill between salsa dancing and the Druid's Comedy Night, I wandered around a few of the neighbourhoods in downtown Edmonton.

What struck me last night is how much LIFE there is in the city. We tend to think of cities as sterile. Yet, everywhere I looked were birds and bugs, trees and rabbits. We want to see ourselves, especially in the urban environment as seperated from nature, but it isn't true. We are always in nature.

It made me think about the people who are always trying to save the environment. I'm not that worried. Life finds away to survive and thrive under some pretty adverse conditions. Nature can take care of itself.

It's about how we take care of ourselves that I'm a little more worried about.

Dan Brodribb's Geek Love appears every two weeks at www.suicidegirls.com. Current article is here.
Posted by Dan_Brodribb at 9:20 AM No comments:

Read it while it's hot.


It's on self-disclosure, an essential skill which applies not just to dating, but to general conversational skills---unless you're working on a crisis line or as a ninja in which case it's probably a no-no.


There's a little more "straight technique" in it than in previous articles, so I'd love to hear any feedback on how people found the explanations or any questions.
Posted by Dan_Brodribb at 11:47 AM No comments:

Roses Have Thorns They Say

Anybody who spends time with me knows I'm a fan of music nobody my age should still listen to. Most of the time, the lyrics to these songs are pretty stupid, but sometimes they surprise you. The Pussycat Dolls have occaisionally hit on some pretty interesting relationship dynamics. The lyrics to Rihanna's Disturbia, would cause many a Buddhist to smile and nod knowingly.

One song I've been thinking about recently is Lady Gaga's Just Dance. Is it a party anthem celebrating the power of music? Or is it about desperation and self-reassurance in the face of overwhelming evidence that you are making very bad lifestyle choices?

As someone who works in show business, I see a lot of partying, and there seem to be two types of people who do it. There are the kind who party because they enjoy it, and there are the people that do it to run from something else.

So which type is Lady Gaga singing about?

To me, the pivotal line is in the chorus: "Gonna be okay."

Does she really believe it? Or is she trying to convince herself?

To quote James Ball: "Discuss. Groups of five."
Posted by Dan_Brodribb at 8:30 AM No comments:

How To Be A Villain: The Importance Of Lifelong Learning 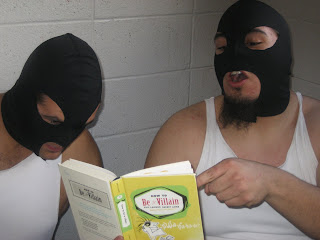 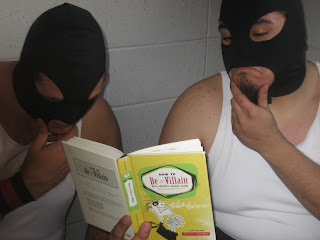 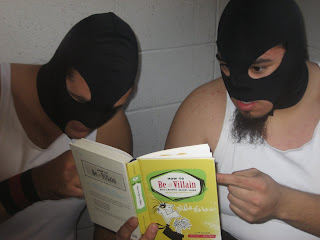 Posted by Dan_Brodribb at 1:53 PM No comments:

A woman I dated once asked why I spend more time on the phone with Dawn Dumont than with her.

I said, "Because, sweetie, Dawn is funnier than you are."

Probably not my finest moment.

But it's true. Dawn makes me laugh. Last night we had an extended phone conversation that covered our love lives, suicide, the Twilight novels, and the word "ninja-fucking," which I think is a marvellous word, even though I haven't a clue what it means (Maybe having sex with someone in a way that requires speed, quiet, and athletic ability--such as making love to your significant other in a moving RV bathroom while her parents play Crazy Eights outside).

Here's the Quotable Dawn Dumont Line of the night that made me howl, although I don't know how well it will translate into writing.

Dawn on May-December Relationships: I guess she worries that he found someone closer to her age. Which is a valid fear when you consider how many other ages there are between his age and her age.

Dan Brodribb's Geek Love appears every two weeks at www.suicidegirls.com. Current article is here.
Posted by Dan_Brodribb at 11:53 AM No comments:

Latest Suicide Girls article is up. You can find it here. The topic is dating cliches.

I've also been posting like mad on my Hot Chicks and Strangers blog, for those who can't get enough of my dating pontifications.
Posted by Dan_Brodribb at 7:26 AM No comments:

Have I mentioned how much I adore my day job co-workers? They certainly keep things interesting.

While making the arrangements with Someone Special--whose anonymity we will preserve by giving her an every-day, ordinary, generic female name, say, Bastet) to drop of the cereal at work, one of the women in my office overheard the conversation.

ME: She's not my girfriend.

OFFICE WOMAN #1: If she's dropping things off for you, she's your girlfriend.

I should pause to explain most of the people at this office are women. And they love stuff like this. Another male co-worker of mine is getting married and the Girls have taken it upon themself to make a countdown calendar for his impending nuptials and update it daily.

OFFICE WOMAN #1: I may have told Office Woman #2 about your girlfriend coming to visit. But just her.

OFFICE WOMAN #3: (coming up out of nowhere): Hey, when does this girl we've all been hearing about get here?

OFFICE WOMAN #1: Well, you shouldn't have told me if you didn't want people to know.

I shouldn't have been surprised. These are after all, the same women who upon hearing some of my woman troubles last year, considered the idea of turning my personal dramas into a skit and performing it at the company Christmas party.

It was an interesting feeling: three parts mortified and one part loving all the attention.

Then again, I write stories about them on my blog, so I guess we're even.

Still, I felt I needed to get a little emotional revenge on Office Girl #1

ME: Now, I'm worried she's going to stand me up.

OFFICE WOMAN #1: And if she does, the whole office will know about it! Ohh that would be so horrible. I would feel so bad for you.

OFFICE WOMAN #3: (from across the room) Hey, I'm on your Facebook right now. What's your girlfriend's name? I want to creep her pictures.

ME: She's not my girfriend.

OFFICE WOMAN #1: Hello? What part of "bringing you cereal" did you not understand?

OFFICE WOMAN #1: It's an emotional commitment! When a woman brings a guy breakfast products at work, that's a sign that she's investing herself in him and he should appreciate her effort by not spending his entire Friday night playing video games with his STUPID LAME FRIENDS, when he knows it's the only time he and his girlfriend will have together for the whole weekend, because she's spending her only free Saturday this month helping HIS mother plant a vegetable garden. Hypothetically.

Bastet showed up and I went to reception to meet her....while a few doors away half the women in the office were watching on the security monitor, yelling instructions at the screen like football fans at a Super Bowl Party.

"Public display of affection! Yes!"
"Relax, you'll sscare her off!"
"No, you jackass, walk her to the elevator as she's leaving..."

At this point Bastet and I stepped into the camera's blind spot. Ten seconds later the reception phone rang as one of the women in the office phoned down for an update. Which was awkward for the receptionist since we were standing right beside her.


Afterwards, the ladies debriefed me--I was thoroughly chastised for not walking her to the elevator. OFFICE WOMAN #3 was most excited as she actually saw Bastet in person ("I walked PAST her on the way to get photocopies!")

I love my job.
Posted by Dan_Brodribb at 2:33 PM No comments:

At my day job, I've taken on the role of buying cereal for the organization so the people working overnights and early morning have something to eat.

I had a show last night and was unable to make it to the store so I asked someone special to pick up a couple boxes for me.

HER: What kind should I get?
ME: I usually get one colorful box with a cartoon character on it and one with a picture of grain or a stone windmill with the worlds "Nutri,", "Grain" or "Harvest" in the title.

Hey, it works for me.

Dan Brodribb's Geek Love appears every two weeks at www.suicidegirls.com. Current article is here.
Posted by Dan_Brodribb at 10:18 AM No comments: