On The Radio Tonight

You'd think that second paragraph would be the important one, but self-promotion comes first.
Posted by Dan_Brodribb at 10:05 PM No comments: 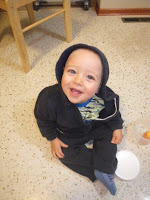 I woke up from a dream that I was in World War II London to find the air raid siren still wailing.
Wait. That’s no siren. That’s my 15 month old nephew.

Guess it’s time to get up.

By the time I got upstairs from the guest room, my brother in law had his son--clad in green penguin-covered pyjamas in his arms. My sister was bustling around in her scrubs.

By the time I finished breakfast, they were both out the door in a tornado of hugs, scrambling for keys and last minute bursts of information.

Then there was silence. I looked at my nephew.

He looked back at me.

For the next six hours, it was just him and me.

There was no sister in the other room, no mother hovering a few feet away. I was responsible for feeding, changing, and generally keeping this infant alive until mother arrived this afternoon.

I was pretty awesome, if I do say so myself.

Watching my nephew is like being an anthropologist. He lives in his own world, by his own rules. There’s purpose to what he does, but the meaning is unclear. He’ll open the kitchen cupboard, carefully remove canned items from the spinning carousel on which they sit and set them on the floor according to some unknown pattern.

Like much of his behaviour it seems simultaneously random and purposeful. In the living room, he selects from his toys with the methodical care of a surgeon preparing his instruments. The blue plastic ring gets passed over for the orange one. The Spider-Man ball goes here. The dump truck goes there. Everything has a place and there is a place for everything, even if there is no rhyme or reason to where those places are.

Not everything is done with care. Chasing him around the couch is a study in lurching, gleeful, giggling anarchy. When he tires of that, he tangles himself up in the white gauzy living room curtains and spins himself around, part Sufi mystic, part manic bride, part drunken Klansman. Any time he finds something soft on the floor, he drops down and presses his cheek into it.

Other times he would grab an orange block and hold it to his ear while letting out a stream of babble as he paced back and forth like an executive closing a deal on his cell phone. The words are gibberish, but the rhythms are strangely close to real language.

Is that what we look like to him? I wonder.

What does our daily routine look like to a child? Talking while holding blinking noise objects to our ear. Opening and closing boxes. Pulling things from here, putting them there.

I expect he thinks we’re the random ones.

Looking after my nephew has given me a whole new respect for the mental side of stay at home parenting. Caring for a small child is a weird combination of constant unpredictability and mind-numbing routine. You can never really stop paying attention, but there is actually very little to do that isn’t endless variations of picking him up, putting him down, putting things on, taking things off, giving him things and taking them away.

I’m glad I have these moments. I probably learn more from him than he does from me.

Especially when it comes to cell phone etiquette.

UPCOMING STUFF MUSIC October 20 - New City, with Desousa Drive WRITING Dan's writing on Dating and relationships can be found at thegatewayboyfriend.blogspot.com Check out this link for information on how to get Dan's Dating for Shy Guys ebook UPCOMING WRESTLING October 20 - RCW Rise of the Legends II (with Tatanka and Big Daddy V, Viscera) November 18 - RCW Egos & Icons (with Big Sexy Kevin Nash)
Posted by Dan_Brodribb at 8:35 AM No comments: