-Pretty cool night last night at the SIDETRACK. LARS and I filmed an interview with CITY TV along with a number of the other musicians about the Sidetrack's open mic. A lot of other comics came down including KATHLEEN, ANDREW, TRAVIS ROBINSON, the elusive SHAWN GRAMIAK and MAX MAULT. An attractive redhead even gave Max her number, which was awesome. It's nice to see the ladies discovering what the rest of us already knew: Max is the Man. 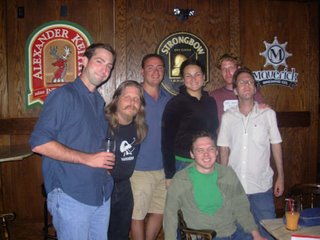 To the left (I hope) is a pic of the soon-to-be-Comedy Superstars from the night, plus Open Stage host Ben Spencer: (L to R: TRAVIS ROBINSON, SHAWN GRAMIAK, LARS CALLEIOU, KATHLEEN MCGEE, BEN SPENCER (in the back), DAN BRODRIBB, ANDREW IWANYK (bottom). Not Pictured: MAX MAULT--but he was gettin' lucky, so he's excused)

At the Fringe on Saturday, I saw Doug the PUsh-up guy. He's a street performer who does push-ups for money. It's actually kind of inspiring. And goes to show you can make a living doing anything.
Posted by Dan_Brodribb at 4:52 PM No comments:

Living Articles in the Journal -TBA

Thanks to all who voted in the poll at www.monsterprowrestling.com. Hopefully, they'll announce results at the next show, September 1

I finally finished the sequel to "...Lighting" as well as a couple more articles. I'm hoping for good things from them.

Interesting week at the Comic Strip. Monday was marred by a tough crowd. Nearly have the audience was from one group and they were more interested in socializing and being disruptive than watching the show. I felt bad for the other people who came to watch the performance. ANDREW IWANYK and Lars really laid into them, which I respect. Wednesday I was on a show headlined by Ric Bronson, and he did great despite being a little bit under the weather.

TOP SECRET PS: I've got a new writing project on the go, that I'm excited about...and maybe you can help. Keep an eye on this space for details
Posted by Dan_Brodribb at 6:13 PM No comments:

In my last blog entry, I forgot to mention that there's a poll on www.monsterprowrestling.com asking who should be the new commissioner, and my alter-ego, "Martial" Art McNeil is on the ballot. My broadcast partner Ripper is also on the ballot, and while I have no doubt he will get more votes than me (I'm the Tubbs to his Crockett, the Jannetty to his Michaels, the Mick Mars to his Tommy Lee) , I'd like to keep the final tally respectable so we don't have to hear him crow about it all over the next DVD taping.

Remember, if elected I promise to take the focus off wrestling in MPW and on more "family friendly" sports entertainment: diva searches and washed-up gimmicks from the past. Wait, someone beat me to it. Okay, how about MPW Musical Theatre. Who wouldn't pay to see The HEATSEEKERS do Jazz Hands or hear HEAVY METAL sing 'I Feel Pretty.'
Posted by Dan_Brodribb at 12:41 PM No comments:

-It was nice to see TRAVIS ROBINSON at the Sidetrack last night, doing his first set in a year or so. "I feel like an alcoholic about to take his first drink," he told me and confessed he hoped the set would go badly. Instead he got two applause breaks out of three jokes. That's comedy: Just when you think you're out, they pull you back in.

-Article coming out this Friday. I haven't been in for photo shoots so they've been using file photos. BOO! I want to see myself in the paper.

-Next MPW show looks to be LAst Rites on Friday, September 1. They're running Friday instead of Saturday, and it could be their last show at their current location. Check www.monsterprowrestling.com for the particulars. The NITE/HEAVY METAL/STEVIE SAINT Jr. Heavyweight match should be particularly cool.
Posted by Dan_Brodribb at 3:49 PM No comments:

Living Articles in the Journal
Friday, August 11 or 18 (TBA)

-In today's EDMONTON JOURNAL, SCOTT MCKEEN wrote a column on none other than ANDREW IWANYK. Scott has written some good stuff in the past, including a piece on grown-up geeks that I really liked. It's also great to see Andrew getting more and more recognition. I performed with Andrew twice on Monday (once at the Comic Strip, once at the Sidetrack--to two vastly different crowd reactions) and he really is one of the hardest working comics out there. he has his own vision and refuses to give up on it. I really think he could make it in this business, so go check him out now so you can say you knew him back when...

-I finished work on the pilot for the Monster Pro Wrestling Madness Televsion show. It's tentatively scheduled to run Saturday, August 26 at midnight on Access (Channel 9) all across Alberta. MPW is planning their Alberta Ave. Show for the 26th as well, so you can go catch the show live, and then run home and see them on TV. It's a wrestling extravaganza! We're also going to do the post-production stuff for the Massacre show this week, so hopefully that will be out soon as well. Check out www.monsterprowrestling.com for the latest updates.

-I might be at the Comic Strip this last weekend in August. It hasn't been confirmed yet, but check back to this blog or my site, and I'll let you know as soon as I have something confirmed.
Posted by Dan_Brodribb at 10:20 AM No comments:

Living Articles in the Journal
Friday, August 11 or 18 (TBA)

-Once again, I've been remiss with my updating. My brother passed away a couple weeks ago, and I've been focused on that. Something like that really makes you re-evaluate your priorities. One thing both of me and my brother were committed to is living the kind of life that we wanted instead of what others wanted for us. I guess I'm even more grateful now for the opportunities I've had, now that I've been reminded it can be taken away at any moment.

-It looks like MPW is in negotiations for some province wide television exposure, so it's back to the Idiom control room to get ready for the pilot. I'm very excited about it, but I'm also a little sad that my brother will never get to see it. We used to watch wrestling together as kids, and once put on a 'match' for my father's birthday complete with entrances (the finish was a splash off the coffee table as I recall).

-ANDREW IWANYK did very well at Just For Laughs, and a major studio has expressed interest in him. That's great news. Andrew's one of the most talented guys I know, and he inspires me a lot with his work ethic and unique vision.
Posted by Dan_Brodribb at 5:06 PM No comments: