Tuesday I was flat on my back, flailing like a landed fish as I tried to draw breath with a two hundred and fifteen pound man sitting on my chest and thinking: Wow. This is just like comedy.

More precisely, learning jiu jitsu is a lot like learning comedy. In both cases, you suck at first, you keep sucking for a lot longer than you think you should, and when the unexpected happens in the middle of performing, you feel completely clueless as to what to do about it. The irony of comedy and jiu jitsu is you end up in the worst positions when you're new, which means your worst situations happen at the time when you have the least skill and experience to deal with them (*). You leave the venue depressed and frustrated with yourself, having been confronted in no uncertain terms with the fact that you really don't know what you're doing.

And yet you can't wait to go back for more.

Just another reason I'm grateful for my comedy experience. It's taught me persistence. It's forced me to learn how to deal with my own emotions and negative thoughts.

Most of all, it's taught me that not everything worthwhile comes easily and that even on nights when you feel like you're never going to get it, you're still learning things and making progress, whether it feels like it or not.

Which is it going to be?

Well, as it happens, I'm at The Comic Strip next week from September 28 to October 2.

Come down and find out.

(*) I'm thinking of YOU, Thirsty Turtle Pub back in the fall of '05. That wasn't so much like having a two-hundred pound man sitting on you. It was more like having a two-hundred pound man sit on you, hit you with a pipe, have his friends kick you in the nether regions and then a witch doctor coming by and sucking out your soul through your nostrils.

Check out this link for information on how to get Dan's Dating for Shy Guys ebook
Posted by Dan_Brodribb at 8:39 AM 1 comment:

Application for Grad School continues. A lot more hoops to jump through than I expected.

Also there have been some new distractions:

Distraction One: A brief hospital visit for some extreme pain in my back which turned out to be a kidney stone. Oddly enough, as soon as I found out it was kidney stone, the pain bothered me a lot less. By normal pain standards what I was experiencing was excruciating, but I've had kidney stones before and by kidney stone standards...I'll take the pain I was feeling with a smile because it could have been a lot worse.

Distraction Two: I have a nephew now. He is adorable, and having him in my life has made me do a lot of reprioritizing.

Distraction Three: I have started training in Jiu Jitsu. There is a tournament in a couple weeks and I'm considering entering.

Why not? I've been training for a whole month.

And of course I have my years of pro wrestling watching to fall back on which has given me a significant advantage even when my training partners are clearly wrestling wrong what with them grabbing the wrong arm and refusing to slow down and work the crowd and forgetting to call the next spot.

Still, I plan to sneak into the tournament grounds and slide a folding steel chair under the mats. You never know when you might need a little insurance. 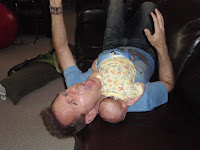 I've been choked out by a six week old infant. That is not what we would consider a good start. In fairness, as anyone anyone who has tried to get past his legs to change his diaper will attest, he's got a heck of a guard.

Check out this link for information on how to get Dan's Dating for Shy Guys ebook
Posted by Dan_Brodribb at 11:07 AM No comments:

Check out this link for information on how to get Dan's Dating for Shy Guys ebook
Posted by Dan_Brodribb at 10:55 AM No comments: