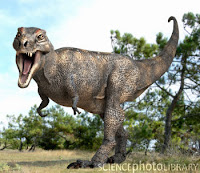 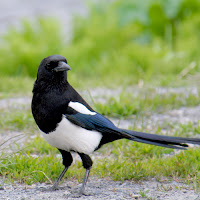 I saw a dinosaur outside my window yesterday.

Okay. It was a magpie. But birds are dinosaur descendants, aren’t they?

I’m not sure how long I watched. It was on the ground by a tree outside my window, pecking at something there, black and white feathers, blending with the snow. The sun was low; half the tree was lit up gold, the other side shadow dark.

I like birds. I like the sound of them when I wake up. I especially like crows. Usually, they show up in pairs, but this morning I saw one perched by itself in the bare branches of a tree. I wondered if it was the same crow I saw a couple days ago, winging black across a blue sky.

I’ve been captivated by this stuff lately. Birds and trees. Snow and sky. All of it surrounding my apartment, just a few steps from one of Edmonton’s busiest roads. Nature doing its own thing to the sound of cars whirring by like internal combustution waves on a pavement ocean.

I wanted to get some books out of the library and learn more, but all the books I could find were on how trees work or what birds are called and how many eggs they lay and how many centimetres long they are.

Basically, they don’t tell me anything.

I learn more just looking out my window.

My eight month old nephew has the flu. He looks confused about the whole thing--all snot and drool and tears, and a look on his face like “why is this happening to me?”

He’s a cool guy. He’s honest and not the least bit self-conscious which makes him fun to hang out with. We sit on the floor, crawl around, and make noises at one another--hoots and yelps and growls and random syllables.

I like the expressiveness of his face. When he smiles, his eyes scrunch up and his mouth widens with delight. When he’s concentrating, his forehead furrows and his eyes latch onto the object of his attention with single-minded focus. When he’s really crying his face darkens red, then purple and his mouth opens, pictures rattling on the walls, small items falling over, magazine pages fluttering as he sucks all the air from the room….

“Here it comes,” says my sister.

It’s the sound of an air raid siren mixed with a million souls crying in anguish.

For a kid that can’t make words, he sure has a way of making his meaning clear.

In other news, my laptop is making strange noises. If it goes, my only computer access will be from work or the library.

That thought doesn’t bother me as much as maybe it should.

Posted by Dan_Brodribb at 8:40 AM No comments: