I Shook Hands With Samoa Joe

A Pair of Singles (with Dawn Dumont) in ed magazine every second Saturday
Next: Online Dating Part 2

How the hell to people manage to find time to update their blog every day?

This isn't a wrestling blog, but SAMOA JOE was in town. SHAWN GRAMIAK had an extra ticket so I tagged along. It was a fun show. Samoa Joe is incredibly charismatic, and is a great performer. His face and body language is awesome. He had the crowd in the palm of his hand from the moment his music hit. He was facing JOHNNY DEVINE, who is no slouch either.

Shawn brought his niece along, which was cool. Her favorite part was when a wrestler would jump off the ropes at his opponent but miss, crashing and burning on the mat. She's right. That never gets old.


When I grow up, I want to be as relaxed onstage as KELLY TAYLOR.

I'm excited about this next run of shows. If you happen to be at the show, stop by and say hello afterwards.
Posted by Dan_Brodribb at 7:17 PM No comments:

A Pair of Singles (with Dawn Dumont) in ed magazine every second Saturday
This Saturday: Online Dating Part 1

You haven't heard from me in a while, because I've been obsessed with the NBA playoffs. Of course now with the best series (Spurs vs. Suns) being over, and the Spurs halfway through stomping my beloved Utah Jazz into Mudhole-Town, I think I'm done (OPEN LETTER TO THE JAZZ: I love you with all my heart. But those powder blue uniforms have got to go. It's hard to take a basketball team seriously when their road gear is the same color as a baby's footie pyjamas).

According to KATHLEEN MCGEE's blog, Rugby fest was quite an event. I only saw the aftermath, as ANDREW IWANYK and TRAVIS ROBINSON dropped by the Comic Strip afterwards. IT was a...memorable show to say the least. Drunk comics, drunk audience members...I've never seen anything like it.

If you like 80s glam metal, you might want to check out RATT POISON, a Edmonton cover band. They do a pretty good job. HEAVY METAL would love these guys.
Posted by Dan_Brodribb at 11:39 AM No comments:

The People Who Make It Worthwhile 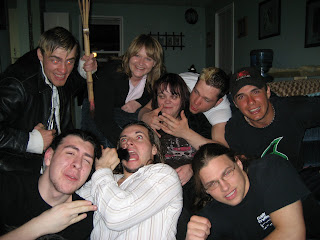 A Pair of Singles (with Dawn Dumont) in ed magazine every second Saturday
Coming Up Next: Commitment

For Mother's Day the plan is to make a meal for my mom. MY sister, my mom and I went for a nice walk last week. That probably doesn't sound cool, but I am very fortunate to have the family I do. They've always been supportive, and I don't know what I would do without them...buy my own washing machine, I guess.

Tried a vegetarian restaraunt on Thursday. It was fun. There's a lot of cool little places in the city that are easy to overlook. I found a cool ice cream place on 124th street, and I'm hoping to explore the Italian part of downtown this week.

Last night was Roni's birthday. Roni has been a wrestling fan for XXXX years now (I don't want to say the exact number for fear of giving away her age--then she'd have to kill me. She's more than a fan though. She's also a friend to a lot of people, and the heart of the local wrestling scene. (The picture in this blog is Roni and her neighbour Tammy surrounded by local wrestlers. Too bad Edge couldn't make it.

I got a camera a few weeks ago and I've been quite enjoying my new toy. Look for more pics over the next little while.
Posted by Dan_Brodribb at 2:42 PM No comments:

A Pair of Singles (with Dawn Dumont) in ed magazine every second Saturday
Coming Up Next: Commitment

Thursday I caught JAY MALONE's show at the Comic Strip. He's a fantastic comic and a great guy. Afterwards we got into the midnight showing of Spider-Man 3 with a few other comics and Comic Strip staff. It's good to have connections. As for the movie...I talked about it a bit on my wrestling blog, but I'm not going to say anything here. I like to focus on the positive--hanging out with a great bunch of people. That should tell you all you need to know about the movie itself.

Saturday DAWN DUMONT and I went to an open mic (after a bit of a false-start trying to find the place) and then checked out SHAWN MAJUMBER at Yuk Yuks. It was a great show.

I went from geek to chic Sunday night, as I had a chance to see FOREVER TANGO at the Jubilee. It was a lot like wrestling. Some cool costumes, neat high spots, and the best routines were the ones with clear characters and storytelling. What really blew me away was the orchestra. They made that show. Plus there were accordion solos!

Afterwards I hit a karaoke bar to watch the replay of the Suns-Spurs game. Since there were no other comics there, instead of begging for a spot to tell a couple jokes...I actually sang karaoke. I was fantastic (Hey, no one I knew was there to tell me otherwise).

I have decided I like Yogurt...at least the kind from Planet Organic. It's almost as good as their potato chips. Healthy food--what's happening to me?
Posted by Dan_Brodribb at 7:50 AM No comments: